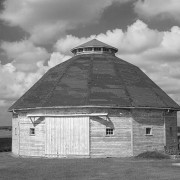 Beautiful round barn near Pittsfield, Illinois

I love to find old barns with character. I found this great round barn near Pittsfield, Illiois. Beautiful old barns are fast disappearing from the landscape as these beautiful structures were built for an era that used horses for the primary source of power in the field.

The round barn, which a half score of years ago was derided and scoffed at, is rapidly gained in popularity on account of its all-around utility and adaptability to practically every line of farming from exclusive grain production to general live-stock farming. When a country man is convinced that he can save from thirty-four to fifty-eight per cent of the cost of a rectangular barn by constructing a round barn of quite similar area he usually becomes decidedly enthusiastic about this unique building, other things being equal. Great credit is owing to the Illinois agricultural college for its commendable and, in the main, successful efforts in popularizing the round barn. Especially in the dairy districts of northern Illinois and southern Wisconsin has the round barn met with particular favor, as the fact that it permits of having the silo centrally located and in this way minimizes feeding labor strongly appeals to the overworked mild farmer.

In the early days when lumber was dirt cheap it was only natural that the rectangular structure should predominate in popular opinion but nowadays when timber is scarce and therefore expensive the country man is gradually being forced into accepting the circular barn on account of the fact that it can be built at so pronounced a saving in material. The noteworthy point about this matter is that once a farmer owns and uses a round barn he will never thereafter be satisfied with any other building. The trouble with most round barns which have been constructed in the past is that they were not provided with self-supporting roofs. They usually were equipped with straight roofs, which necessitated numerous supports in the barn below, and were both costly and inconvenient. The dome-shaped, self-supporting roof in use to-day does away with these defects, and in addition nearly doubles the capacity of the mow.

There are no reviews yet.

Be the first to review “Pittsfield Round Barn” Cancel reply