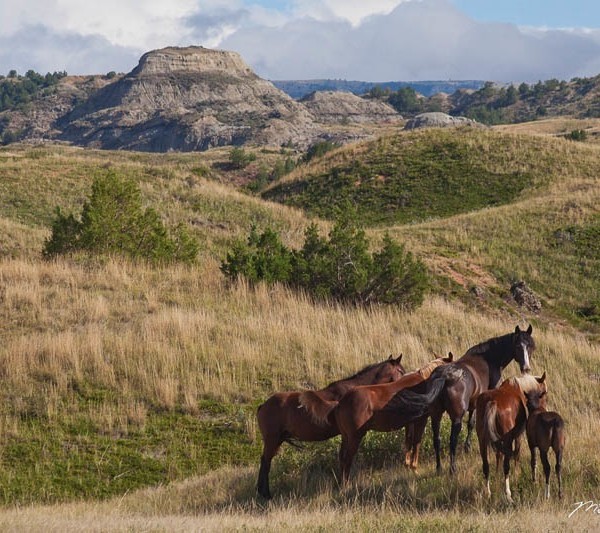 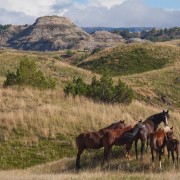 The modern horse, Equus caballus, evolved on the North American continent but was one of several mammalian species that became extinct here by the end of the Pleistocene epoch some 10,000 years ago. Having survived on the European/Asian continent, the horse was re-established in North America by the Spanish in the 16th century. Escaped horses became known as “mustangs”, from the Spanish word “mesteno”, meaning “wild.” They are also referred to as feral horses since they came from domesticated stock. During the period 1600-1850, mustangs ranged throughout the Great Plains in vast herds, sometimes numbering in the thousands.

The acquisition of the horse by the Plains Indians changed those groups from pedestrian hunter-gatherers to mounted buffalo hunters and warriors within the span of a generation. As saddle stock and cow ponies, these early horses played a significant and indispensable role in the exploration and settlement of the United States. Their wild kindred figure prominently in the cultural history, art and folklore of the American West.

With the development of the modern ranching era, wild horses came to be regarded as a nuisance to cattlemen and were largely exterminated throughout the West. In the 1950s and 1960s, efforts to preserve wild horses began. The 1971 Wild Free-Roaming Horses and Burros Act mandated the protection of these animals as a “national heritage species.”

There are no reviews yet.

Be the first to review “Badlands Ponies” Cancel reply